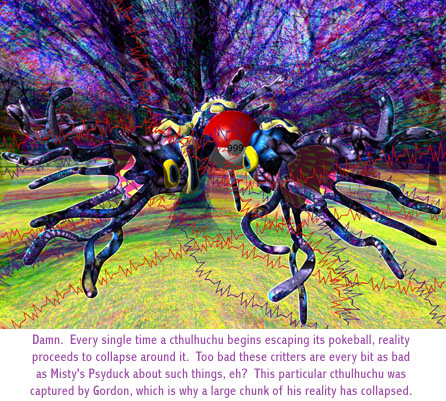 Gordon Klock is a deeply bizarre animator, video producer, photographer, illustrator, painter, and electronic musician. His photos and illustrations have appeared on several obscure album covers, and in various magazines (including being the regular surreal illustrator for Cyber-Psychos AOD, in which he was originally profiled in issue #1). He has done numerous music videos for local art, industrial, and punk bands. Originating as a slide screen projectionist for music shows, he evolved (during the early 90s) into forming Tantric Lobotomy Commission with Chris Yardley. They began by doing interactive, "psychedelic", video walls for several local and national rave promoters, and grew into creating their images for live performance and video. Alongside being the art room supervisor for Death Equinox, Gordon and Chris are also the official projectionists there. Gordon has also performed with several experimental bands, including Tragic Shores, Elan, and Fuguelixir. He recently released his own solo CD, Fresh Dead Bird Satellite, and trying to finish a stack of large oil & acrylic paintings.